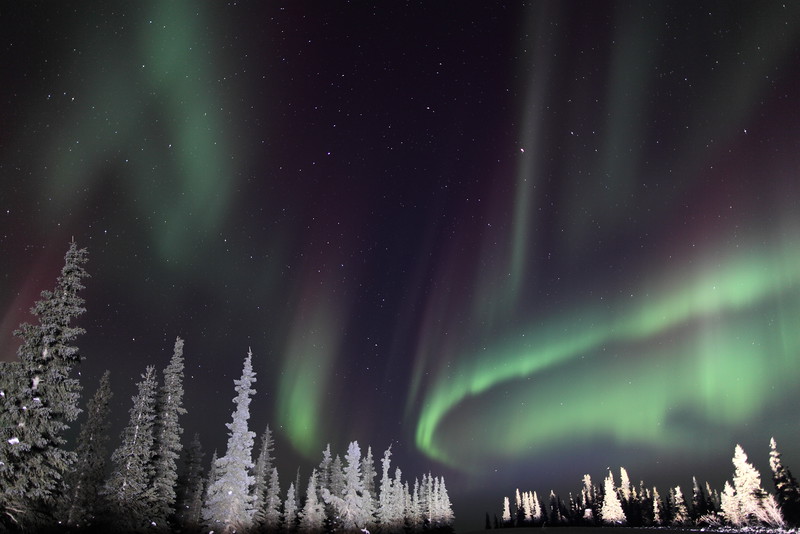 The most breathtaking auroral displays of the season occurred on March 16-17, 2013 - it became an all-night event at the Arctic Circle in Alaska and likely one of the best Northern Light shows for the entire Solar Cycle thus far (Cycle 24).

What caused these magnificent Northern Lights?
Sunspot region 1692 was the source of a significant long duration M1.1 solar flare occurring at 06:58 UTC on March 15, 2013 - associated with a large full halo coronal mass ejection (CME). The solar storm reached the Earth near 10:00 PM Alaskan time on March 16 (06:00 UTC on March 17) and the CME arrival triggered a 12 hour-long geomagnetic storm producing colorful Northern Lights visible as far South as the Northern tier of the United States.

Note the barely visible but brightening comet Pan-STARRS as the sky darkens in part 1 of the time lapse movie. The comet is setting on the horizon as the show was about to begin. The all-night time lapse video - once assembled - required a total of 7,628 images captured during a 10 hour session between 09:30 PM on March 16 and 7:30 AM on the following day (05:30-15:30 UTC on March 17), a staggering amount of 226.06 GB of raw footage - all equal to 8 minutes of final time lapse generated and to be assembled for the scheduled raw footage presentation at dawn (at the end of clip 4) before heading North to the Brooks Range.

The still photos of the Arctic Circle Aurora can be seen here: http://auroraphoto.smugmug.com/AuroraPhotography/Arctic-Circle-Auroras